Three doctors published a new Atkins diet update in 2010 that has been gaining a whole new generation of followers. The book, "New Atkins for a New You: The Ultimate Diet for Shedding Weight and Feeling Great," is quickly becoming the new Atkins Bible for fans of the low carb diet. It's easier to follow, easier to understand, and is winning over legions of fans, including some doctors who used to have reservations about the Atkins approach.

The original Atkins diet was backed by anecdotal evidence rather than long term studies. The new book has a long section on the science behind the diet, including the results of studies done over a period of several years. A study published in the Annals of Internal Medicine reported that the Atkins diet is good for the heart because it increased HLD (Good) cholesterol levels in many dieters. 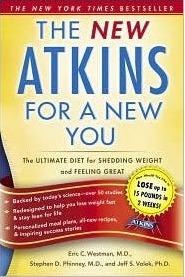 Dr. Eric Westman, Dr. Jeff Volek, and Dr. Stephen Phinney worked for years to put together a sensible approach to the Atkins diet that would work for today's consumers, who are often short on time. They devoted a chapter to dining out options and have expanded the section on the Induction phase so that it is easier to follow and less restrictive. They also mention that the headaches and fatigue sometimes noticed during Induction is often simply the result of salt being flushed from the body. Their simple fix? Take a sodium supplement or add some beef bouillon to your diet during the first few weeks.

New Atkins for a New You: The Ultimate Diet for Shedding Weight and Feeling Great

Shifting Emphasis: Why the Updated Atkins Diet is Healthier

When developing the new approach to the Atkins diet, the doctors noticed that many people began the Induction phase by eating nothing but meat and salad greens. In order to maintain a healthy diet, the new approach adds more vegetables, even during Induction. Non-starchy vegetables such as asparagus, string beans, broccoli, onions, peppers and tomatoes can now be eaten during Phase I of the Atkins diet.

How does the new Atkins Diet update allow for more vegetables? By letting you subtract fiber grams from your carbohydrate grams. This allows you to eat more vegetables throughout all phases of the diet. By increasing the fiber allowed, the new version of the Atkins diet minimizes side effects such as sluggishness and constipation. "New Atkins for a New You" also includes a complete vegetarian option that's long on versatility and taste.

The latest, updated version of the Atkins diet also focuses on learning how to slowly add carbohydrates back into your diet successfully. This was one of the most difficult things to do on the original Atkins diet; however, the newer version gives you tips on how to recognize cravings for what they really are - signs of carbohydrate dependence that can be overcome. The emphasis on adding carbs properly makes it easier to transition from Induction through later phases of the diet without problems.

Although lean protein remains a foundation of the latest Atkins diet update, it isn't central to your diet success. Because more vegetables are allowed and are stressed more, there is less dependency on protein. In short, the new version of the diet is an even healthier way to shed those unwanted pounds and keep them off.