What is the Atkins Turbo Diet?

If you have come across the term Atkins Turbo diet and been thinking it is something you are missing, here’s the scoop. It has nothing to do with the real Atkins plan and is a copyright ripe-off so blatant it’s amazing they haven’t been sued off the planet.


Atkins in Name Only

The faux “turbo diet” plan, called Eco-Atkins, was featured in Woman’s World in the summer of 2009. The Atkins Turbo Diet is not affiliated with the Atkins Diet, and is, in fact, a radical high-carb, low-fat vegan diet where you eat no meat or animal fat. It is labeled as the anti-meat version of Atkins, although when you read the details it is nothing like it. The Eco-Atkins features:

The Atkins diet website issued a statement about Eco-Atkins, which claimed to be an Atkins turbo diet that offered faster results than the one Dr. Atkins developed: 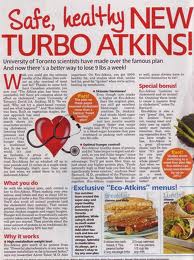 A myriad of derivative low-carbohydrate programs have sprung up over the past few years, all claiming to be a new and improved version of Atkins. Eco Atkins is the most recent example. But the truth is that Atkins has always been the leader in low-carb nutrition with its scientifically validated approach to low-carb weight loss and weight control. Obesity, and obesity related health problems, are at epidemic levels and Atkins has made all the significant contributions to weight loss through low-carb nutrition and science. The imitators are just that – imitators, and free riding on Atkins’ reputation for success and science.

Atkins spokesperson Colette Heimowitz responded to Woman’s World magazine: “While a clever, politically correct name, this short-term (four weeks) vegetarian diet study recommends 130 grams of carbohydrates daily, an amount simply too high in carbs to be named ‘Atkins’ and not appropriate for most overweight and obese individuals with insulin resistance.”

Effects of the Diet on Cholesterol

Even worse than the possible trademark infringement, there are no studies on how the Eco-Atkins diet affects LDL cholesterol, or HDL (good) cholesterol, and triglycerides. In contrast to the Turbo Diet, the real Atkins Diet has done numerous studies on the science of low carb nutrition, and independent research has shown that Atkins dieters had significantly greater increases in HDL and greater decreases in triglycerides than people who followed a more conventional diet. The latest studies, done in March 2007 by Dr. Christopher Gardner of Stanford University, again vindicated the late cardiologist Dr. Robert Atkins by showing that the Atkins diet menu plan was indeed a heart healthy diet.

As you already know, Atkins is a turbo diet in which rapid weight loss is possible if the plan is followed carefully. The original Atkins has always made allowance for vegetarians in all four phases of the plan with the necessary requirements to lower insulin levels and stabilized blood sugar. There is nothing faster than Dr. Atkins diet plan. The fiber, protein, healthy fat, and yes, red meat and eggs, will help you feel full so that you can lose weight without feeling hungry. The Atkins Nutritional Approach emphasizes real whole foods that have a low carb, low glycemic index for a lifetime of delicious eating with heart healthy benefits.