The Atkins Diet and Caffeine are Incompatible

The Atkins Diet and caffeine consumption are incompatible, according to Dr. Atkins’ guidelines for successful weight loss. This was one of the most troubling aspects of the diet when I first considered trying it. I was used to having several cups of coffee during the earlier part of my day, then switching to iced tea for the afternoon and evening. I especially dreaded giving up caffeine during the hot summer months – nothing was more refreshing for me.

Coffee and the Atkins Diet

The Atkins diet food list made it clear, however, that caffeine wasn’t a good thing. After reading up on why, I had to agree. You see, the caffeine in coffee causes unstable blood sugar levels, which is one of the things the diet is trying to avoid. After drinking or eating something with caffeine many people have a hypoglycemic reaction. Their blood sugar level temporarily drops, triggering cravings for sugary foods or carbohydrates. And Dr. Atkins also noted that caffeine simply wasn’t healthy.

The Atkins Diet and Caffeinated Drinks 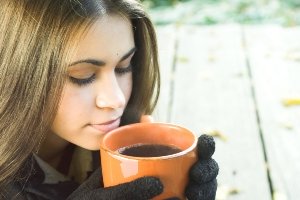 The problem with giving up caffeine (whether you’re on the Atkins diet or not) is that you may be so used to having your “caffeine fix” every day that you will experience withdrawal symptoms when you first stop drinking it. The symptoms can include headaches, fatigue and feeling faint. Many people have this reaction giving up sodas as well, since they also have a lot of caffeine. Even foods like chocolate have a high caffeine level, so if you are addicted to both chocolate and caffeinated drinks, you may have a difficult time adjusting to a caffeine-free lifestyle.

Headaches and Other Side Effects

My solution was to wean myself slowly off of caffeine before beginning the Atkins diet menu plan in earnest. The headaches and other possible side effects of not having caffeine aren’t a direct result of being on the Atkins plan, but of getting the dependency on caffeine out of your system. It was easier for me to begin this process before starting the diet so that I had one less adjustment to make when I started the diet. It also meant I didn’t have to quit drinking coffee “cold turkey,” which is more difficult than slowly cutting back.

How I Cut Back on Caffeine Right from the Start

I cut back on my caffeine intake by a few cups of coffee the first week, and then eliminated iced tea over several days’ time. I substituted herbal tea for my coffee, and drank plenty of water instead of iced tea. I sometimes added a squirt of lemon to my water for a bit of added flavor. By doing this, I was able to start the diet having already given up coffee and the Atkins Diet and caffeine consumption was no longer a problem for me.

Why Some Doctors are Against the Atkins Diet